How to write times

How do you actually write times correctly? What looks like a very simple question at first glance turns out to be a bit more complicated on closer inspection.

These are all valid notations of times. Which variant you specifically choose should depend on where or in what type of text you specify the time.

The reader-friendly time
First there is the “literary” indication of the time. In novels or long running texts you will find the variant with a simple point as a separator between hours and minutes. However, seconds are not written in this form. A characteristic of this notation is that only those digits are used that are really necessary. Zeros as "filler material" are not used.

Of course you can also write out the time:

Another variant is the superscript of the minutes after the hour, without any separators. However, this spelling is practically only used in handwriting and is increasingly out of fashion due to the cumbersome formatting involved in word processing.

Outside of running texts and manuscripts, the more bureaucratic spelling of the time according to DIN, EN and ISO standards dominates - that is the one with a colon. These standards are not spelling rules, but recommend what times should look like in office communication or data processing, for example. This notation seems more precise, also because it enables seconds to be specified.

The little word "clock" can be omitted, but it is important that the times are always written in DIN format with a colon separated by two digits. “9:30 am” would not correspond to the norm (in this case you should switch back to the spelling with a single point).

The spelling with the abbreviation “h” has also become widespread, which actually does not mean “clock” but “hour”. This unit symbol does not indicate a time, but defines a duration. However, that does not prevent many from using this variant anyway, in a sense the h as the short form for UHr.

Such an indication would actually mean "twelve and a half hours", but not indicate the time "half past twelve". This notation with incorrectly used unit symbols is therefore not correct for times. If you do not want to add "clock", you should leave out an explanatory note entirely. If it has to be, then there is a half or full space between the time and the unit (“12.30h” without a gap is twice as bad).

Differences in pronunciation and spelling

By the way, time information written out as words is always written in lower case (“it is twelve o'clock”), because what is meant is the time, not z. B. the number twelve itself.

The time with a single separating point is the classic German spelling, the colon variant, on the other hand, has a more cosmopolitan effect, as it is mainly used internationally, not least in England and America. The latter also has a more modern, technocratic touch, as it dominates everyday office life and can be more precise than the literary spelling. In comparison, the simple point looks like a more leisurely form of the time. 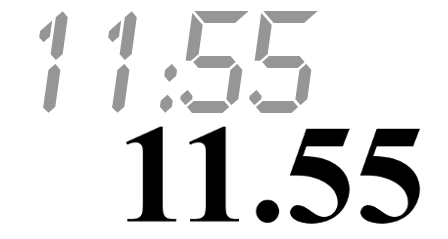 modern with a colon, traditional with a simple period

Nowadays, the variant with a period and the form with a colon are basically the same, but the colon notation is still a little less common in longer texts and can be disturbing in literary texts. In lists and tables, on the other hand, the standardized time specification leads, here the missing colon or missing leading zeros can be irritating. Apart from such subtleties, however, no general recommendation for a specific spelling can be given. Whether full stop or colon - you decide for yourself what is appropriate based on your preferences and feelings. The time should only be written uniformly within a document.