Feeling of identity is a personal attribute 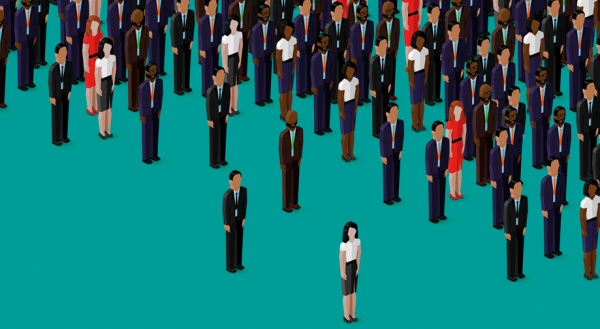 In all organizations, gender stereotypes and gender-typical role expectations for women (and men) are still commonplace. However, women are not only pushed into certain roles, but they often also take on typical roles familiar from the family because they are socially and emotionally familiar to them. Taking on traditional roles such as that of a girl, daughter, mother, wife, partner or seductress promise a female sense of identity and social recognition in the professional environment. The conscious or subconscious assumption of such roles is a risk for women, it can also become a trap.

Career as a favorite daughter?

Nice, hardworking, often young and sometimes insecure women confirm their male superiority to men in higher positions. They appear less worrying than self-confident, critical and openly interested women. This constellation can lead to a father-daughter dynamic in which a superior takes on the paternal protector and support role, the subordinate then the complementary, loyal, appreciative daughter role. For colleagues at the same level, “daughters” and “girls” are also pleasant because they do not appear as competition. However, “daughters” in senior positions will have a hard time asserting themselves because in the role of daughter they just have to obey and not determine. One possible benefit of the daughter role is that women in these roles do not initially have to face any competition, experience emotional security and protection and, in the best case scenario, are also unselfishly supported professionally by the boss father, just as a good father supports his child. The danger, however, is that they will remain dependent on this emotional relationship and fail to learn to assert themselves. Because the attributes of hard-working, nice and harmless are difficult to reconcile with the role of a respected manager. Then it can happen that a woman in a management position finds herself after a while in the role of a controlling mother, to whom role-typical expectations are directed, but who remains powerless. The example of Ms. R., who came into coaching to get out of a professional impasse, shows such role conflicts.

The senior physician Ms. R., 38, wants to be clear about whether she wants to keep her leadership role. She comments disappointed: "First I took responsibility for everything and now I am treated like a nagging mom". In the beginning, Ms. R. took on all the tasks that had been lying around for a long time. She has tried to address unresolved conflicts in her department and realizes that there are major leadership problems in several professional groups. For her commitment, she initially receives positive feedback from the senior physician for many years. But even after a year, your task definition is vague. Ms. R. is responsible for negotiations with the management, duty planning and personnel matters, but the ultimate responsibility remains unresolved. Ms. R. criticizes the fact that the chief doctor on the one hand badly structures tasks and does not give instructions, but on the other hand wants to control everything and does not adhere to agreements. As long as she took a lot into her own hands without making demands, Ms. R. was her boss's favorite doctor. That has changed since she demanded that the chief physician position himself in conflicts and really lead. An old dynamic repeats itself: The chief physician does not exercise his management function consistently because the recognition of the young doctors under his control is more important to him. The senior physicians have to compensate for this gap without being given clear tasks and competencies. The more demanding they become, the more they fall from grace, and tensions increase. Ms. R. is now faced with the same dilemma as her predecessor.

Ms. R. initially tried, in the role of a hard-working favorite daughter, to tidy up and mediate between everyone. This turns out to be a thankless task, because the more problems it tries to solve, the more conflicts come to the surface. It is therefore fighting to draw in structures and reach agreements, the compliance with which it must, however, consistently check. This is inconvenient for many. Now she falls into a negative female role stereotype: the little valued role of a critical controller or bad mother. The response deteriorates, Ms. R. feels like an annoying "strict mother". The relationship with the chief physician is cooling down, the new senior physician is already in the starting blocks as the successor. With her ideas and career plans, she runs nowhere. In coaching, Ms. R. is supported in reducing her engagement as a troubleshooter, defining her own areas of responsibility and using the management to resolve the various conflicts. She has to break away from the various stereotypical expectations and learn to live with less recognition and with unresolved conflicts. She decides to take on a technical management role again.

Demands on female managers in terms of empathy and communication skills often reflect needs for maternal care and consideration. This corresponds to the ideal of the good mother. In traditional families, the mother has internal power, while the father represents external authority. Therefore, in the role of mother, a woman can easily find herself in a weak position with informal power in the workplace, in which it is difficult for her to alliance because she has too few formal (exchange) skills. A “mother manager” runs the risk of being judged primarily on the basis of their supportive and caring role for the team and less on the basis of their own contributions. These traditional stereotypes of femininity can lead to career dead ends. Only the myth of the Amazon conveys a picture of how the boundaries of stereotypical gender concepts can be overcome in a strong group of women.

Career only as an Amazon?

The Amazon is a mythological model of female heroism. A strong, combative woman forges powerful coalitions with other women (Amazon army), which she places in influential positions. The Amazon is the only role with which gender equality could be established, but sometimes with strong headwinds. In defense, negative stereotypes such as "emancipation" or "ice cold career woman" are often brought into play.

Ms. M., 36, is already the head of a 25-person team in an international IT company after six years as a computer scientist. She relied heavily on her professional performance. As a department head for some of the employees who are significantly older, she is now reaching her limits. Ms. M. says of herself that she “knew from the start what she wanted”. It was always clear to her that she wanted to make a career in her company. She wanted to get to know key people and make herself known in the company. That is why she volunteered in company social projects. As part of personnel development for executives, she had a mentor who actively supported her and who is also a personal role model for her. She is well networked in the company, including among the (few) female junior managers. She has now reached her first department head position. In her management position, Ms. M. behaves competently and fairly, she practices a cooperative management style. She is popular with her team and her supervisor, from whom, however, no more suggestions for the next career steps come. The older employees appeal to them not to leave the team for the next higher career level as quickly as their (male) predecessors who are only interested in advancement. The mentor warns Ms. M. not to “lead too well”. As a manager, she could become so comfortable and irreplaceable that her superior and her team would no longer be interested in "giving her back". Trying to please everyone is a trap, especially for highly motivated women. The expectations of Ms. M. correspond to the wishes of a responsible and caring mother (in the team) or competent partner (from the superior). The mentor promises to work in her network to ensure that she gets new opportunities. But mentoring alone is not enough.

In the coaching it becomes clear that Ms. M. must aggressively demand the development of promotion options from her superior. She experiences that traditional stereotypes continue to be effective in a modern company that promotes gender equality. She is unsettled by the appeals from her team. When reflecting on her own values, she comes across the resolution that she does not want to act as a “cold career woman”. This is how negative stereotypes also work from within. She wants to behave in accordance with her own values, but realizes that the use of career opportunities is also linked to the delimitation of expectations of (female) empathy. In general, Ms. M. must also take the risk of disappointing expectations on her career path. She started as an “Amazon” on her own account, without being aware of it. Because she learns to view the topic of power as a positive way of dealing with her own interests, competencies and resources in coaching, she can develop a more self-confident attitude towards using her own influence. Her mentor and her professional network strengthen her sovereignty. After a short time, Ms. M. is proposed for a high-ranking project group.

The examples show that the career path for women in management positions often runs as a tightrope walk between different models of femininity and professionalism. Even if a woman starts very self-confidently and “amazon-like”, she encounters traditional emotional role expectations and can find herself in dead ends, especially as a junior manager. Traditional role offers harbor risks, but also open up micropolitical room for maneuver, because women can potentially be influential in all roles depending on the situation. In the event of a conflict, it may be beneficial to act in a de-escalating parenting role, while in negotiations with business partners, a charming demeanor can create trust and good relationships. The sovereign play with traditional women roles presupposes that these are micropolitically reflected and used with role distance. A reflected relationship to one's own effectiveness and power is a prerequisite for success in any case. Because it always depends on who is directing.

Describe the risky roles of women, perspectives on gender and the ubiquitous logic of action of micropolitics Daniela Rastetter and Christiane Jüngling in her book »Women, men, micropolitics - gender and power in organizations«On the basis of case studies practically and theoretically well-founded. The book is in the series »Advice in the world of work" published. The authors advocate gender competence and micropolitical competence in every consultation and clearly show how this approach can be implemented.