Where is the Nile 2 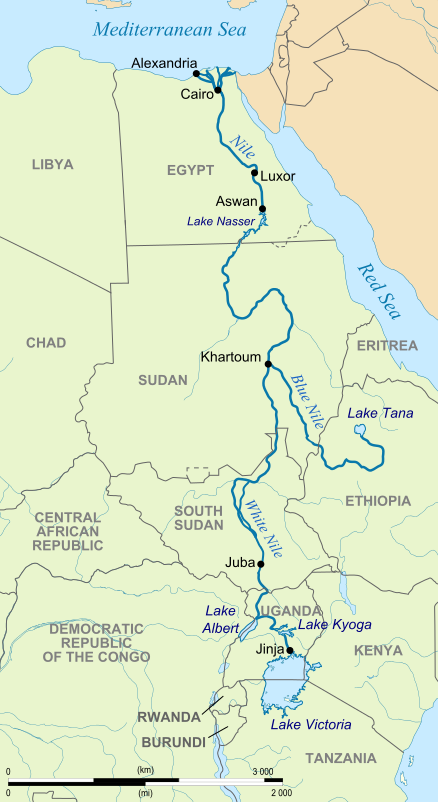 At 6671 km, the Nile is the longest river in the world. Its catchment area is 2.87 million km². It rises in the mountains of Rwanda and Burundi, then flows through Tanzania, Uganda, South Sudan and Sudan before flowing into the Mediterranean in Egypt. The Nile is mainly formed by two major headwaters, the Blue Nile and the White Nile.Archaeologists believe that the kingdom of the pharaohs could only have come about through the Nile. The fertile mud that the Nile left behind each year after its floods created the wealth of the pharaohs. The Egyptians did not know where the source of the river was. Because it was so hidden that it was only found two millennia after the fall of the Pharaonic Empire. So come along on a journey along the Nile and discover the ancient empires and modern cities on its banks.

The source of the Nile 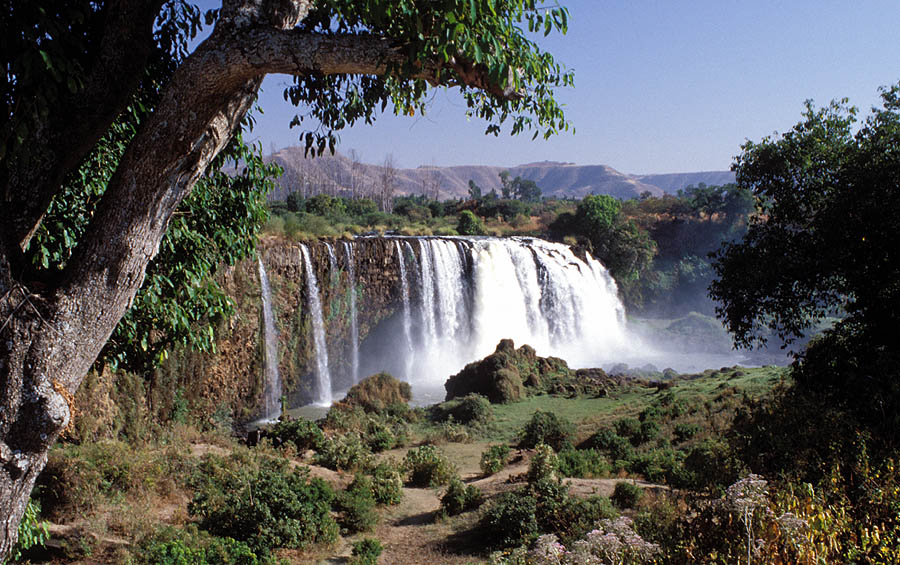 The Blue Nile forms the right source of the Nile.It rises in the highlands of northwestern Ethiopia, flows through Lake Tana and forms the 50 m high Tisissat waterfalls, the second highest waterfalls in Africa. With a width of over 400 meters during the rainy season, it is the second largest waterfall in Africa. At Khartoum it unites with the White Nile to the actual Nile.

The oasis of the Nile 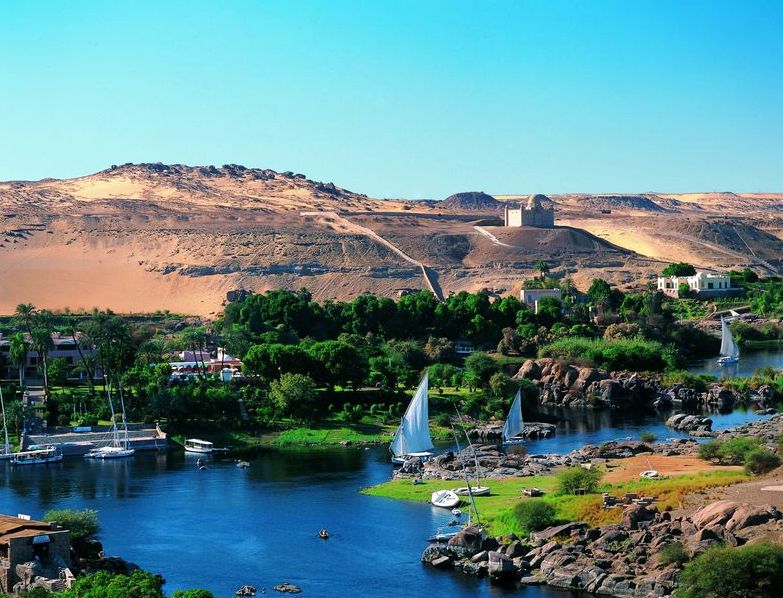 From Karthum the Nile flows through extensive desert landscapes. The desert west of the Nile is the Libyan desert. The desert east of the river is called the Arabian Desert. After an S-curve, the Nile flows further north. It forms a broad valley between Sudan and Egypt. This river oasis is between 5 and 20 kilometers wide, depending on the amount of rain in the source areas. It's hard to believe, but it is in this lowland that most of Egypt's agricultural products are grown. As you can see in the photo on the right, most of the people on the Nile travel with a felucca, a wooden boat with a sail.

The Atbara, the last tributary to the Nile

The Atbara is the last tributary to the Nile. It is also called the Black Nile. The Atbara also comes from the Ethiopian highlands. In its middle section, the Nile is disturbed by many rocks, so that the river forms rapids and waterfalls. These places are called cataracts. The ancient Egyptians still knew six cataracts. The 1st cataract is near Aswan. It was the natural border between Egypt and Nubia from the earliest times. The 6th cataract is located near Omdurman in Sudan.

Shortly after Cairo, the river fans out to the Nile Delta. Many tributaries branch off from its two main arms, which form the approximately 24,000 square kilometers large delta and flow into the Mediterranean Sea. In the photo on the left you can see how modern Cairo has developed on the right and left banks of the Nile.

Dams and canals changed the Nile 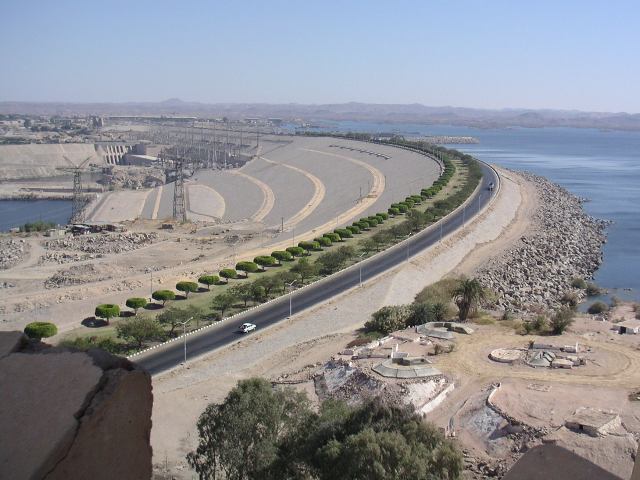 Two centuries ago the natural course of the Nile began to be changed. Dams were built on three cataracts. The largest dam was built near Aswan, on the border between Sudan and Egypt. A lake 500 kilometers long has formed here. The Egyptian part of the lake is called Lake Nasser, after the former Egyptian President Gamal Abdel Nasser. The lake in Sudan is called Nubia Lake. After the Aswan Dam, the Nile was shaped into a huge irrigation canal. This means that several harvests per year are possible. But the annual floods no longer occur. The fertile mud, which was once a blessing for the Egyptian farmers, remains absent. This leads to increasing salinity of the soil. On the way of the Nile from Karthum to Cairo, so much water is extracted that only 5 percent of the Nile water arrives at the mouth. On the left in the picture you can see the Aswan Dam. The ancient Egyptian temples at this point had to be dismantled over many years and rebuilt elsewhere.

The Nile is a dwindling animal paradise 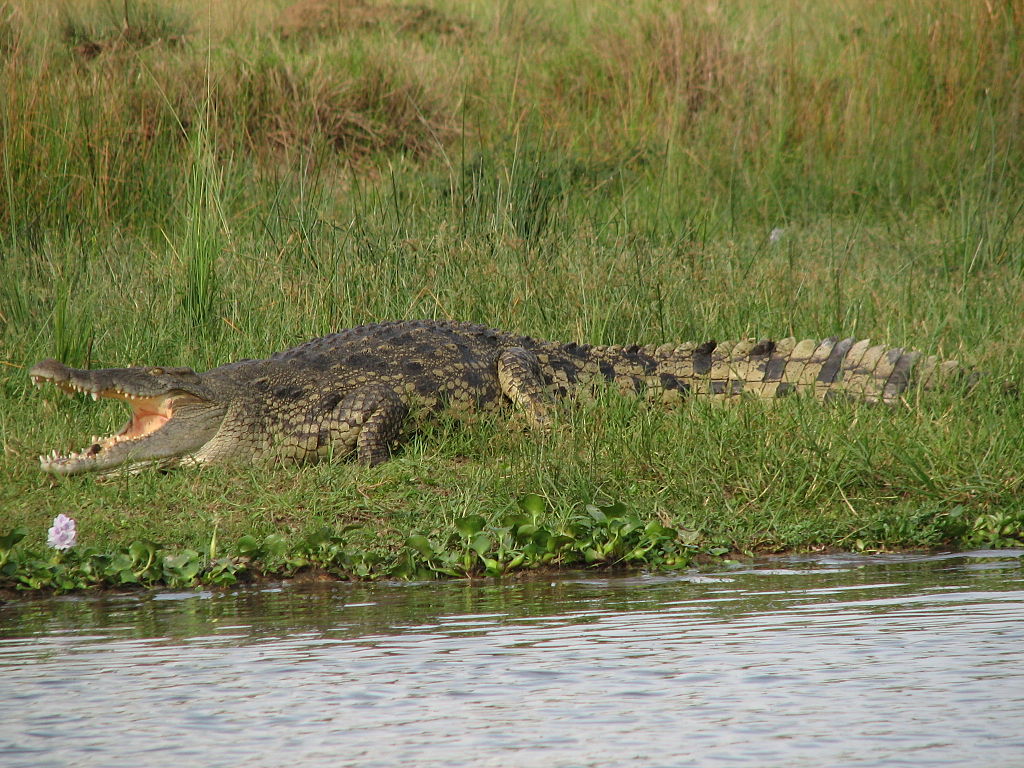 In earlier times, the Nile was the habitat for a diverse range of flora and fauna. On old grave drawings you can see people hunting crocodiles or you can see lions and leopards ambushing antelopes and herds of gazelles. But those times are a thing of the past. With a lot of luck you will see a jackal roaming the banks, in the Nile maybe a Nile crocodile floating in the water or a couple of hippos dozing on the bank. But they too have become rare here. The bird world, on the other hand, is impressive. Cattle egrets can be seen hunting in shallow water. You can see hoopoes or swallows as well as falcons and other birds of prey circling over the farmland. Many different fish species live in the Nile, such as Nile perch, pike and catfish. Frogs, amphibians, turtles and snakes find cover on the banks and in the reeds. They attract flamingos, storks, geese and ducks that hunt the small animals.

Already knew? The ancient Egyptians worshiped the crocodile god Sobek as the god of water. Live crocodiles were present at their rites in honor of Sobek. To do this, however, they bred the smaller crocodiles from West Africa and not the larger and more dangerous Nile crocodiles.

The banks of the Nile are a huge open-air museum 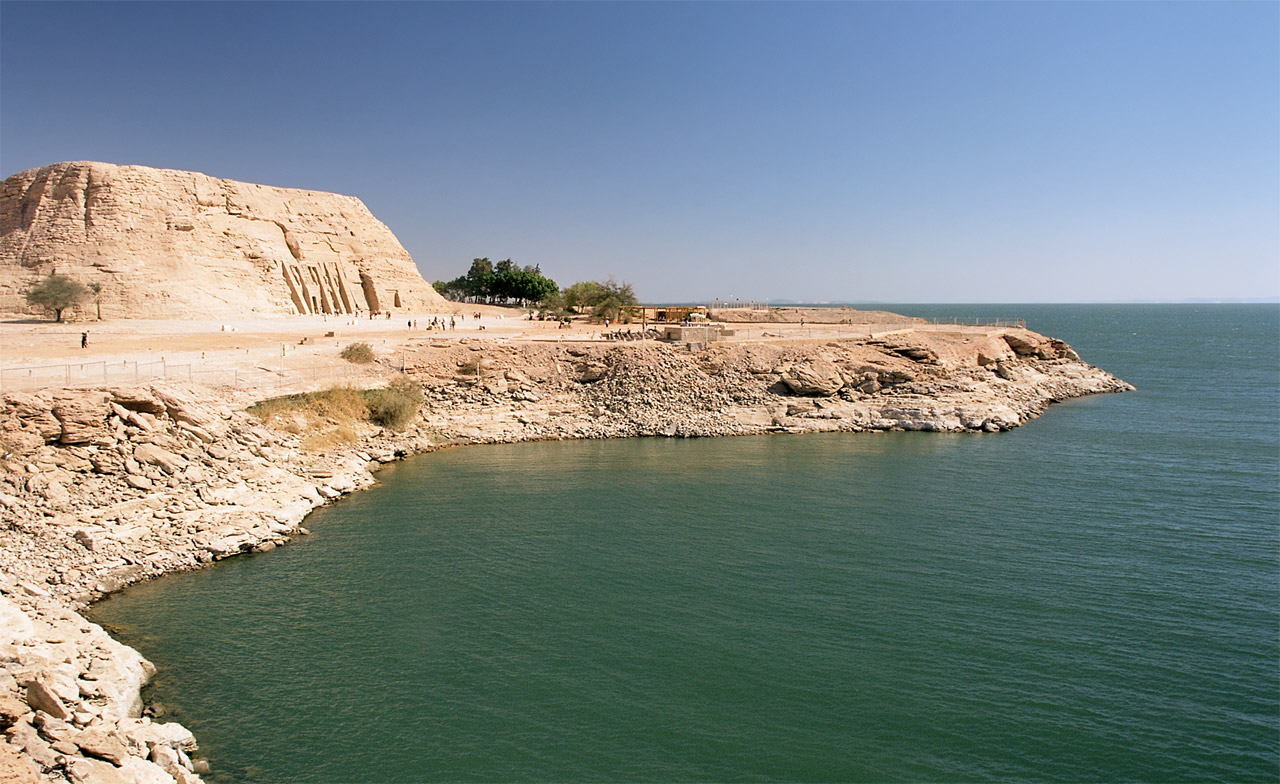 Between the cities of Luxor and Aswan are the most famous sights of Egypt. You can see ancient Egyptian temples and other archaeological buildings of importance. Luxor is located on the eastern bank of the Nile. Here you can visit the Valley of the Kings with the tomb of Tutankhamun. In the heart of Luxor is the Luxor Temple, one of the best preserved monuments from the Pharaonic Empire. You can also visit the Karnak temples, they are considered the largest temple complex in Egypt. In Cairo, the visitor is offered a unique sight. Less than a quarter of an hour's drive from the capital, the pyramids of Giza soar into the sky. In the city center you can visit the magnificent Muhammad Ali Mosque, also known as the Alabaster Mosque. The city of Aswan marks the southern end of Egypt. In ancient times the city was considered the gateway to "Black Africa". Gold, ivory and slaves from Nubia, today's Sudan, were traded here. Near Aswan you can marvel at the Elephantine Island, the Ramses statue or the imposing rock temple Abu Simbel on Lake Nasser.

More about the Nile in the realm of the Paraons