Who is Hazrat Ali

.Books on Islamic topics can be found in the Eslamica Publishing House.

Imam Ali (a.), Son of Abu Talib, is the cousin of the Prophet Muhammad (s.), His son-in-law, executor, first Imam of the Twelve Imams (a.) And fourth caliph.

Originally his mother wanted to give him the name "Asad" or "Haydar" (both means lion), but when she and the child came to the house of Abu Talib, the father of Imam Ali (a.), The father asked for the name of the child. The Prophet Muhammad (s.) Present there said: "His name is Ali".

Some of his nicknames and titles are: Murtadha, Abu Turab, Imam of All in All and Abul-Hassan (father of Hasan). He is the commander of the believers.

Imam Ali (a.) Grew up in the house of the Prophet Muhammad (s.) And was raised directly by him.

As Prophet Muhammad (s.) The verse "and warn your next of kin"(26: 214), he invited the Hashimites over to him, gave them food and invited them to God's way. His uncle Abu Lahab made fun of him, and some of the guests dispersed. ) reunited his relatives and said: "O sons of Abdulmuttalib, follow me and become princes of the world. Whoever follows and helps me today will be my brother, my executor, my supporter, my inheritance and after me my representative." Nobody answered. Then the young Ali (a.) Got up and said "Oh Messenger of God, I will help you".Muhammad (s.) Asked Ali (a.) To sit down until the request and the response of Ali (a.) Were repeated three times. Thereupon the Prophet Muhammad (s.) Declared that Ali (a.) Will be the named. Along with the first revelation, this event is the first to which the Shiites refer when they refer to Imam Ali (a.) As the rightful successor of the Prophet Muhammad (s.). This tradition is also known in Sunni works, but is interpreted differently there.

After the emigration [hijra] in the so-called fraternization between emigrants and local helpers, every local helper should take an emigrant as a brother. There was only one exception: only Prophet Muhammad (s.), Who was himself an emigrant, took another emigrant as his brother, namely Imam Ali (a.). This exception regulation should clarify the exceptional character of Imam Ali (a.) And his relationship to the Prophet Muhammad (s.).

On 1st Dhul-Hijah 2 a.d.H. Imam Ali (a.) married Fatima (a.), the daughter of the Prophet Muhammad (s.). The later Imams Hasan (a.) And Husain (a.) As well as Zaynab (a.) And Umm Kulthum (a.) Come from the marriage. Another son named Muhsin died in the womb under tragic circumstances. Imam Ali (a.) Is the only imam who is the father of two imams.

Because a future daughter of Imam Ali (a.) And one of his later wives was also called Fatima, he was also called the husband of the three Fatimas: mother, wife and daughter.

In the Battle of Badr he was one of the three champions. According to the style of fighting at that time, three of the bravest warriors from Mecca stepped forward for individual combat, and Imam Ali (a.) Killed two of them: Walid and Utbah. The Meccans lost courage and then the battle.

Imam Ali's (a.) Two-point sword, Dhu'l-Fiqar, gained great fame through him. On the battlefield of Uhud, Imam Ali (a.) Stood bravely as protection from the Prophet Muhammad (s.) And saved his life when many companions had already turned away discouraged and some had also spread the claim that he was Prophet Muhammad (s.) already killed. Imam Ali's (a.) Participation was also decisive for the successes at the trench battle and in Chaibar.

Shortly before his death, Prophet Muhammad (s.) Renewed his mandate for the succession through Imam Ali (a.) In the famous speech of Ghadir Chum.

After the death of the Prophet Muhammad (s.), Imam Ali (a.) Carried out the ritual full body cleansing of the deceased on him. Meanwhile, and in his absence, some of the companions in Saqifa chose Abu Bakr as the first caliph. During the time of that caliphate, his wife Fatima (a.) Was illegally expropriated and succumbed to a serious accident after an attack on his house. He himself spent a good six months in complete seclusion compiling the Holy Qur'an in book form. In addition to the compilation known to all Muslims, he had also completed his own compilation in which all the verses were listed in the order of their revelation, which became known under the name Mushaf Ali.

After the assassination of the third caliph Uthman ibn Affan, Imam Ali (a.) Became the fourth Muslim caliph. Since he abolished some privileges for some companions that the earlier caliphs had introduced, several internal Islamic wars were imposed on him, including the camel battle by Aisha bint Abu Bakr, the battle of Siffin and the battle against the renegade Khawarij. During his time as caliph he shaped important stories, such as that of the widow help by Imam Ali (a.). Most of Imam Ali's (a.) Poor charity are only apparent after his martyrdom.

The title "Commander of the Faithful", which was actually only due to him, was also used by other caliphs and thus abused.

At the end of his self-sacrificing life, on the 19th of Ramadan 40 a.d.H., during the prostration in the mosque of Kufa, he was struck from behind by Ibn Muldscham with a sword on the first of the nights of the ordinance and died on the 21st of Ramadan 40 a.d.H. in the second of the nights of determination. Immediately after collapsing under the blow of the sword, he uttered the famous saying: "I was blessed with the Lord of the Kaaba".

He was 63 years old and died at the same age that the Prophet (s) died. His son and successor in the Imamat, Imam Hasan (a.), Took over his ritual full body cleansing of the deceased. Imam Ali (a.) Was buried in Najaf. The Imam Ali Mosque was built around his shrine. In Afghanistan, however, it is also alleged that he was buried there in the Blue Mosque of Mazar-i Sharif, which is historically not tenable. 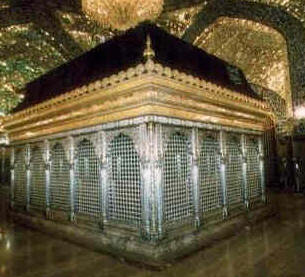 Imam Alis (a.) Burial place in his mausoleum in Najaf

Calligraphy with the lion as the symbol of Imam Ali (a.)

The tradition has also been confirmed by Sunnis such as Tirmidhi. Tradition is also reflected in the title Gate of Gates (bab-ul-abwab). This special knowledge of Imam Ali (a.) Was also reflected in his miracles, including in the rock wonder.

Countless valuable speeches and texts by him are still preserved today, such as his agreement with Christians, his government mandate to Malik al-Ashtar or the supplication of Kumail. A very extensive collection of his speeches and writings is summarized in the work Nahdsch-ul-Balagha. His excellent behavior towards people of different faiths is documented in the story "Imam Ali (a.) Government pension to a Christian".

Imam Ali (a.) Had a total of 27 children; In addition to the four children of Fatima (a.) already mentioned, he had 23 with the following women whom he married after Fatima's death (a.): Umm Habib bint Rabia, Umm al-Banin, Laila bint Masud al-Darimi, Asma bint Umais, Umm Said bint Urwa, Umama bint Abul-Aas ibn al-Rabi, Chaula bint Jafar, Mahyat bint Imru al-Qaisi and other women. The children are mentioned with the respective women.

A number of his children became martyrs on the day of Ashura together with their paternal brother Imam Husain (a.), Including the four sons of Umm al-Banin.

Prof. Annemarie Schimmel has translated some of his poems into German in rhyme form. The Pascal bet was formulated a millennium earlier by Imam Ali (a.). 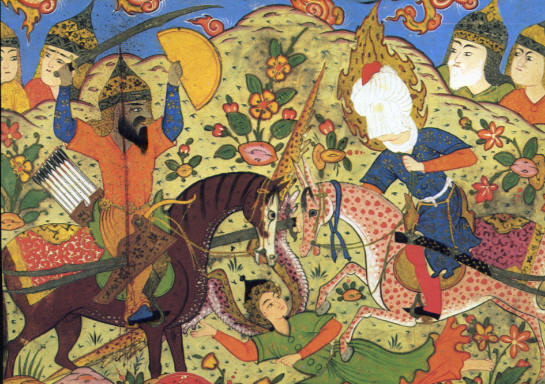