What are the conditions for hydrogen bonding

Hydrogen bond is understood to be the electrostatic attraction between a partially positively charged hydrogen atom and an electronegative atom of another functional group or another molecule. The prerequisite for the formation of hydrogen bonds is, on the one hand, the (positive) polarization of the hydrogen atom in question by a strongly electronegative atom (O, N, or F) bound to the hydrogen atom and, on the other hand, the presence of suitable atoms that carry a partial negative charge and / or have a lone pair of electrons.

In general terms, the following simplified model can be used: 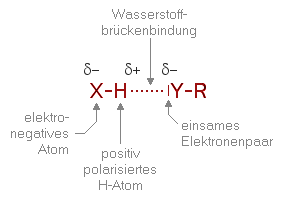 The hydrogen atom is bound to the electronegative atom X and is attracted by the electron pair of the atom Y. 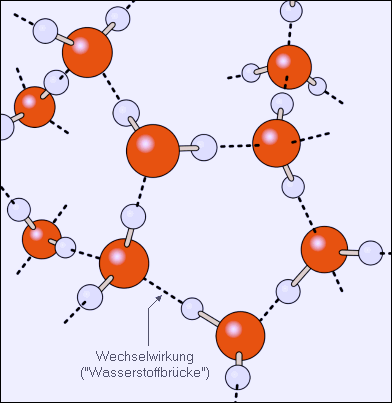 If you look at water, then - due to the strong electronegativity of oxygen - the covalent OH bonds are polarized. The hydrogen carries a positive partial charge, the oxygen a negative one. Since the water molecule is angled, it is easy for the positive hydrogen atoms to interact with the negative oxygen atoms of neighboring molecules (see figure on the right). These interactions (the "hydrogen bonds") mean that individual water molecules cannot easily escape from the liquid when it evaporates, which increases the boiling point of the water.