MENON 2: Do you know what virtue is?

MENON: Socrates, can you tell me if virtue can be taught? - Or can it not be taught, but only practiced? Or neither taught nor practiced, did you have it by nature or in some other way?

SOCRATES: How am I supposed to know whether you can teach virtue, I don't even know what virtue is at all. Do you know

MENON: Clear. The virtue of a man is that he is able to administer the affairs of the state, and in its administration to do good to his friends and to hurt his friends, but to guard himself against nothing of the kind. consists in the ability to be politically active and thus to do good to friends, bad to enemies and to be careful that nothing bad happens to oneself. The virtue of the woman, of course, is that she must manage the household well, keep everything in good order and obey the man. Again something different is virtue in children, boys and also in girls or older men, depending on whether they are slaves or free citizens. And so there are many other kinds of virtue: for every activity and for every age, depending on the task, each of us has his virtue - and likewise, I believe, his wickedness.

SOCRATES: I seem to be extremely lucky, because even though I am only a Looking for virtue, I now find a whole swarm of them who have settled with you. But - to stay with the image of the swarm - if you had answered my question about the nature of bees that there are many and various things, what would you answer if I asked further: “Do you think that they are many and are many in that they are bees? Or are they not differentiated here, but only in something else, such as in terms of beauty, size or the like?

MENON: I would reply that if they are bees they are not different.

SOCRATES: Then do the same with the virtues: even if there are many and different (types), they all have one and the same certain shape, a common basic trait, for the sake of which they are virtues. We should pay attention to this when trying to answer the question of what virtue actually is. Or do you not understand what I mean?

MENON: I think so; but I have not yet fully grasped what is asked for.

SOCRATES: Do you think that it is only with virtue that there is another for man and another for woman? Or also in terms of health, size and strength? So do you find that man's health is different and that of woman's? Or is it the same concept of health everywhere, whether a man is healthy or whoever?

MENON: Health seems to me to be the same in both.

SOCRATES: So also size and strength? If a woman is strong, will she be strong by the same concept? By 'the same' I mean: that strength makes no difference in being strong, whether it is in a man or in a woman.

MENON: No, it doesn't make a difference.

SOCRATES: But should it make a difference to virtue in being virtuous whether it is in a child, an old man, a woman or a man?

MENON: So somehow I find that this is no longer quite similar to the others.

SOCRATES: What? Didn't you say that the man's virtue is to manage the state well, but that of the woman, the household?

SOCRATES: Can one manage the state or household or something else well if one does not manage it prudently and fairly?

SOCRATES: So both women and men need the same thing, prudence and justice, if they are to be good, i.e. to have virtue?

SOCRATES: But justice - is that virtue [absolutely] or a [ Type of ] Virtue?

MENON: How do you mean?

SOCRATES: Well, I could say, for example, that rounding is a kind of figure, but not 'figure' as such, because there are also other [geometric] figures.

MENON: Correct; hence I also say that not only is righteousness virtue, but also many other kinds. there are other kinds of virtue as well. Bravery, for example, is also a virtue, and prudence, wisdom and generosity, and many others.

SOCRATES: Now the same thing has happened to us again: we have found many kinds of virtues, although we are only looking for one, the general basic feature. We have again confused components and whole, species and genus. - You cannot explain the nature and essence of virtue to someone by listing only components or types of virtue in the answer. 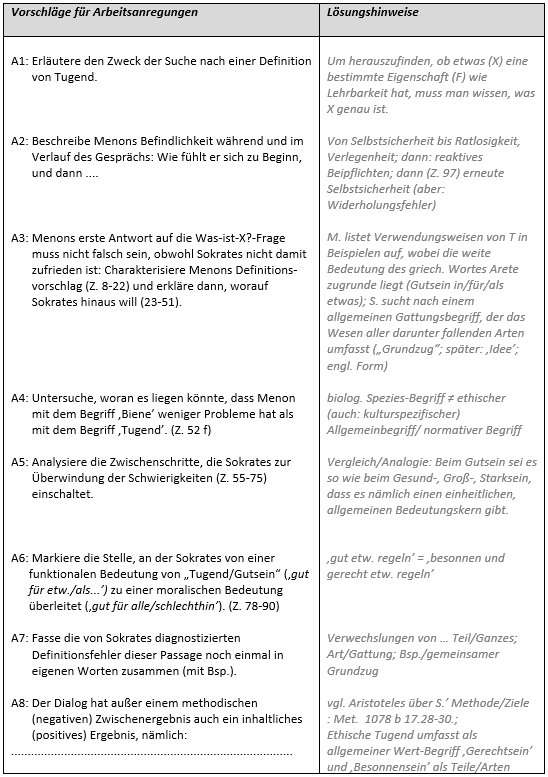