Can I grow almonds in the UK?

Olives, wine and almonds. Every hectare a challenge.

Olive groves and vines to the horizon, red earth, rolling hills. The sun is shining. Spain like out of a picture book. Juan Ángel Martín Gómez has his favorite place right here. The agricultural engineer and owner runs the 'Viñedos des Vistalegre' business founded by his father in Granátula de Calatrava in the Castile-La Mancha region, approx. 200 km south of Madrid. When his father took over the business with 600 hectares in 1970, the focus was still clearly on growing grain and raising livestock. But over the past 20 years the family has gradually switched to growing olives, grapes and almonds. Today the land of Finca Viñedos des Vistalegre covers around 120 hectares for olive cultivation, 80 hectares for wine cultivation, and almond trees on 70 hectares. The remaining area is not cultivable area in the mountains or fallow areas.

The Finca Viñedos des Vistalegre is one of the medium-sized companies in Spain. "We never sold land, but instead bought pieces of land again and again with great effort," says Juan Ángel Martín Gómez with an appreciative look at what his family has achieved. In his opinion, the bigger the company, the more profitable it is. What does it take above all? For the 52-year-old one thing was clear: consistency. “Consistency is what makes a really good job. If you always take care of things, they also work, and you have success and joy. "

Persistence and reliability - these are attributes that Juan Ángel Martín Gómez also found in his manager Juan Antonio Paredes Imedio. For more than 14 years, this has played a major role in the company's success. Juan Antonio Paredes Imedio has extensive specialist knowledge and guides the six other employees of the finca with expertise. Around 15 seasonal workers are added at harvest time. Tree pruning, fertilization, treatment of the trees, irrigation, harvest - all of this belongs to his area of ​​responsibility. Most of the headache is the irrigation system and keeping it in good working order, because that is the most important thing on the finca. Which is all too understandable given an average rainfall of 350 mm. The red earth that can be found around the Finca Viñedos des Vistalegre is often seen in the Mediterranean. It is limestone red clay, also known as 'Terra Rossa', which is relatively poor in humus, but rich in iron components and, with adequate water supply, quite fertile. 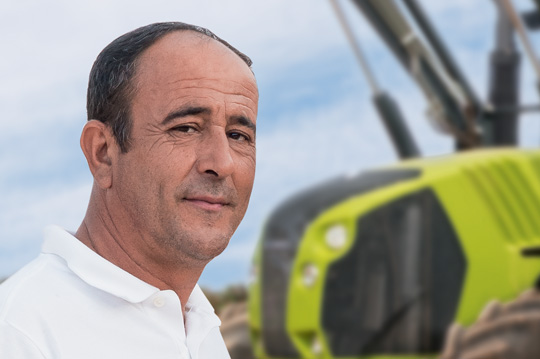