Is life a duty

Duty to Live - Right to Die

What to do when a terminally ill person who cannot kill himself asks to be killed? Is it allowed to switch off devices without which a patient cannot continue if the patient asks? Should doctors be allowed to prescribe deadly drugs to people who wish to die and see life as torture?

Great Britain: hold out to the end

The terminally ill British Diane Pretty is not allowed to die - at least not with the help of her husband. In general, active euthanasia is illegal in the UK. However, in March the British Supreme Court allowed passive euthanasia for a paralyzed, terminally ill woman: the doctors switched off the ventilators without which the woman could not live. 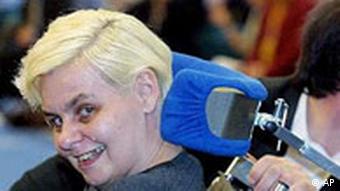 Diane Pretty is also paralyzed from the neck down and cannot kill herself. So she turned to the Supreme Court with the concern that your husband should not be punished for killing her. The Supreme Court did not allow active euthanasia in this case. Diane Pretty did not give up her desire to die prematurely and proceeded to the next stage of the way through the instances. Before the European Court of Human Rights, she argued: If the right to life is guaranteed by law, then a right to die should also be allowed. However, on April 29, 2002, the court denied her the right to die at her husband's hand.

Many roads lead to the grave

There are many arguments for or against euthanasia. Affected people like Diane Pretty plead for being able to decide about their death as well as about their life. Opponents of euthanasia, on the other hand, see many dangers: What if the will to die is only temporary or was triggered by a treatable emotional crisis. In addition, euthanasia could play the grim reaper for selfish reasons, for example because they are hoping for an inheritance.

In the discussion it must be taken into account that not all euthanasia is the same. A distinction is made between active and passive euthanasia. Active direct euthanasia, for example, is provided by a doctor who, at his request, injects a person with a poison into a syringe. Active indirect euthanasia involves prescribing pain relievers for the patient that result in premature death. Death is not the primary goal, but a side-effect that is approved. With passive euthanasia, life-sustaining measures are omitted.

Other countries other manners

Active direct euthanasia is not allowed in Germany. Active indirect and passive euthanasia, on the other hand, are permitted. Doctors can, for example, refrain from medical measures if the only aim is to prolong death.

Physicians have been able to help anyone in the Netherlands who are terminally ill, suffer from unbearable pain and seriously want to die. Active direct euthanasia is therefore allowed. However, before assisting euthanasia, doctors must have their diagnosis confirmed by independent colleagues. To prevent abuse, regional special committees monitor the use of euthanasia.

In June 1997 the US Supreme Court ruled that active direct euthanasia was not allowed. Aiding and abetting suicide, on the other hand, is not illegal. The Supreme Court placed the final decision in the hands of the courts of the individual states. In 1994, Oregon citizens narrowly decided that indirect active euthanasia should be allowed. This allows doctors to assist the terminally ill with suicide. The person who wants to die must take the medication prescribed by the doctor himself.

Many who are not allowed to die in Germany can be brought to Switzerland, where active indirect euthanasia is allowed. Here the aid organization "Exit" organizes those who will die and the terminally ill with a medical certificate for poison, which those who want to die must then take it themselves. Only - that's not fair, because people like Diane Pretty who are completely paralyzed have no chance of dying in this system.