How can I practice listening to others

Never listen, just talk, talk, talk! Today, almost every promising employee is expected to have strong communication skills: He or she should be able to present, argue, convince - and all thanks to rousing eloquence and polished rhetoric. Not all wrong. But that quality is often forgotten that is far less exhausting and, on top of that, often leads to the goal much faster: being able to actively listen. According to surveys, 96 percent of adults think they are good listeners. But only very few actively practice it. In any case, we are not aware of any example of anyone “listening” to each other. As for talking, but very much ... 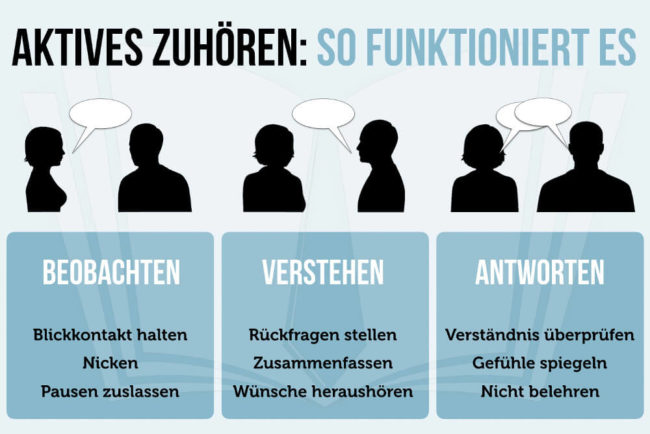 The art of active listening

Do you remember the legend of King Croesus of Lydia? Allegedly he asked the Oracle of Delphi at the time whether he should march against the Persians.

“If you do that,” the oracle prophesied, “you will destroy a mighty empire.” Great! Thought Croesus: which empire could be more powerful than that of the Persians? And the oracle had practically guaranteed that he would be victorious.

So Croesus went into battle haughty and certain of victory - and lost. In his wish for a colossal triumph, he only heard what he wanted to hear. What he overheard, if not ignored at all, was the question of which realm the oracle was referring to by the prophecy. So Croesus sealed his own downfall ...

When the Allensbach market research institute asked around 1,800 Germans what constitutes a good conversation for them, 80 percent answered: listen.

The benefits of listening are underestimated

This is especially true for executives. Most managers would say their main strength is ...

Not all wrong. But the ability to listen is far more powerful. Being able to listen is massively underestimated in almost all companies. Therefore, it cannot be repeated enough: it is possibly the most powerful quality of a manager. Who listens to other people, especially his employees ...

"The listener is a silent flatterer", Immanuel Kant recognized. And there are actually a number of studies that expose listening as a real career kick.

What Science Knows About Listening

For example, Harvard professor William Ury was able to show in his studies that people who actively listen to their counterparts achieve better negotiation results than those who mainly put forward their own arguments and ideas.

The body language expert Lillian Glass, on the other hand, writes in her book "The Advantage-Body Language" that people who can listen to others appear particularly strong and self-confident.

This is also confirmed by scientists from the University of Tennessee. In their studies, around a third of the test subjects rated good listeners as having the greatest communication skills - one of the 10 most important soft skills. You could also say:

If you really have something to say, you must first listen.

However - you have to admit - active listening is an act of strength. It is exhausting and makes you tired. While talking activates energies, listening tends to drain us mentally. Studies show: Even though we “only” listen, this takes up around 25 percent of the brain's capacity. If you want to mutate into a better listener, you need a certain mental strength. It is, in fact, a new way of life.

There are now numerous studies that provide impressive evidence of the benefits of active listening. Harvard professor William Ury was able to show, for example, that good listeners do better in negotiations than skilled rhetoricians. The US author Anthony Alessandra, on the other hand, has identified four different types of listeners:

Strictly speaking, this is not a listener at all. Often, however, these are not malicious ignoramuses at all, but people with problems on an interpersonal level. They are more of an introvert and find it difficult to fully engage with the other person.

This guy doesn't really listen either - he just pretends to be. In fact, he or she only hears what he or she wants to hear. And when these guys aren't interested in something, they usually switch off. Consequence: Conversations with this listener type are at best scratching the surface.

This is where a practiced debater is hiding who claims not to have a dialogue, but to win a debate. Accordingly, he hears and understands the arguments, but his thoughts have long since reached his counter-arguments and the exchange of blows. These types are often very clever, analyze quickly - they just often lack real understanding and understanding.

According to Alessandra, the ideal type of listener. He stops his inner monologue when he listens, gives his counterpart his exclusive attention and fully adjusts to the conversation partner - also emotionally. In short: he has emotional intelligence.

The good news is: Hardly anyone is just one of the four types of audience. As a rule - depending on the situation and conversation - we are a mixture of all four types, with a dominant expression for one type. The best thing, of course, is the tendency to actively listen (see video).

Facts worth knowing about listening and listening

Please do not confuse “listening” with the large eavesdropping, with “listening” and certainly not with silence. Good listeners are always good questioners:

The point is not to chew what has been said, but to really understand the other person, to grasp his emotions, his motives. It also conveys mutual appreciation.

Ultimately, listening is a form of empathy and thus emotional intelligence.

You will find that most brilliant minds are also good listeners.

Listening also includes making all your senses receptive. Good listeners observe the body language of their counterpart, register the fluttering in their voice or feel the aggressive undertone.

And they respond to it - directly or via the meta-level. So you always seem fully concentrated and in return enjoy a lot of trust.

Because they think more than they speak, listeners also produce less nonsense.

In addition, listeners do not interrupt or complete each other's sentences. What's more, you are able to endure silence and listen to it while the other is still struggling for words or composure.

The 3 phases of active listening

This phenomenon is called selective perception in technical terms. What sounds negative is ultimately based on the strength of our brains to distinguish important from unimportant. Without this protective mechanism, we would not be able to process the wealth of information that pours down on us every day and would probably go crazy.

Selective perception is not just a strength (as Croesus case shows). It is not uncommon for the effect to be based simply on the fact that we are not listening closely. While the other is still talking, we have already drawn our conclusions and are already five kilometers further in our minds. Consequence: We talk past each other and misunderstand each other thoroughly.

Listening is food for the brain. Our gray cells function like a battery that can be charged by means of electro-neural stimuli. For example, Giselher Guttmann, a neurologist at the University of Vienna, has observed that brain waves or even the smallest fluctuations of up to 30 millionths of a volt already influence our performance.

Tones, sounds and noises send their electrical potential to the cerebellum, which controls our body movements and our sense of balance. From there they even migrate into the limbic system, which in turn controls emotions and the release of hormones and other biochemical substances. Listening can influence our entire body - and initially relatively independent of the content. Here's how you can become a better listener yourself:

How to get your boss to listen to you

Power makes you deaf. The more powerful people get, the more deaf they get. Only metaphorically, of course: With increasing power, managers become more immune to recommendations and advice - be it from experts, colleagues or employees. One could also say: You develop a growing "egalitarianism" towards deviant thoughts.

This is suggested by four experiments by Francesca Gino, Leigh Plunkett Tost and Richard Larrick from Harvard Business School: Every time their subjects felt something like power over the group of other participants, they became unwilling to listen to others, let alone to them to hear - and vice versa. You could also say that they developed autistic traits. But how do you get your boss to listen to you again? We have a few more recommendations here ...