How many people can fit on Saturn 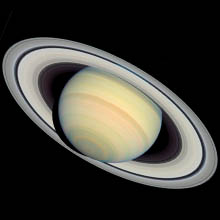 Saturn is the 6th planet in the solar system. It still traces its orbits behind Jupiter. It is almost twice as far from the sun as Jupiter. It takes him about 30 years to go around the sun!

Saturn is a huge gas planet. It is a little smaller than Jupiter, but at least 840 globes would have room in Saturn! Like the sun, Saturn consists mainly of the gases hydrogen and helium. There is probably a solid core located deep inside it.

Saturn has a distinctive ring system, which makes it the prettiest of all planets. The rings consist of dust and small pieces of ice as well as small stones and somewhat larger pieces of stone and ice.

The rings were created by collisions of Saturn's moons with each other and with comets and meteorites, whereby a lot of ejecta was hurled into space. This debris then gathered around Saturn.

The one with the rings

Saturn revolves around itself very quickly. It only takes 10 hours and 14 minutes to complete one revolution (the earth takes 24 hours). This deforms the gas ball. It flattens out at the poles and thickens in the middle. 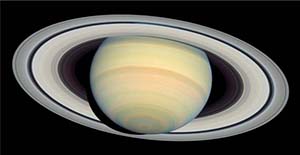 Careful observations have shown that Saturn is surrounded by 100,000 individual rings, which are separated from one another by gaps in which there are almost no particles. The rings of Saturn are gigantic in size. The outermost ring has a diameter of 960,000 km. In comparison, the rings are very thin, the thickness is probably just 100 meters!

The ring system won't last forever. The attraction of Saturn ensures that parts of the rings repeatedly dip into its atmosphere and burn up.

For a long time, Saturn was considered the outer planet, since Uranus and Neptune were not yet known. Although Saturn is more than a billion kilometers from Earth, we can still see it well in the night sky. The rings cannot be seen with the naked eye, but they can be easily seen with binoculars or a telescope. There is more to this on the 'Observe Saturn' page. 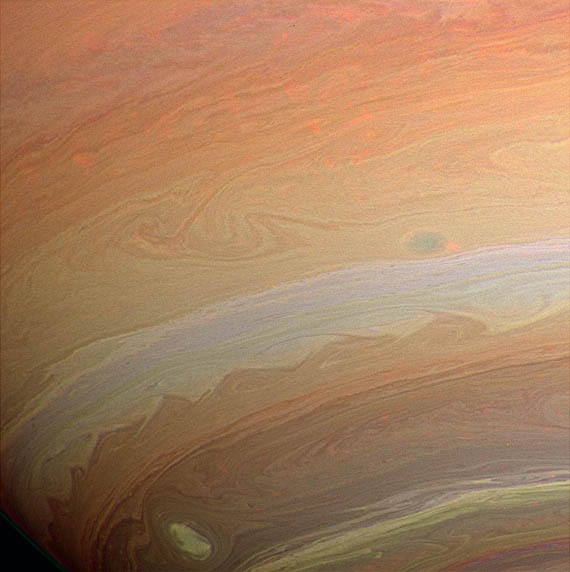 Saturn has the lowest density of all planets. If we had a large enough pool of water, we could let Saturn swim in it. It is guaranteed not to sink because its specific density is lower than that of water.

Like the Sun and Jupiter, Saturn consists mainly of the gases hydrogen and helium, so it is a gas planet. It has an outside temperature of around minus 195 ° C. The further you penetrate into your atmosphere, the more pressure and temperature rise.

As a result, the gases condense more and more and liquefy in deeper layers. In the center they probably even go into a solid state. This core of Saturn should be about the size of the globe.

In Saturn's atmosphere it is quite stormy, as the planet rotates very quickly around itself (a complete rotation in 10h 47min!). Similar to the Great Red Spot on Jupiter, large storm areas can also develop here. Some of them are very large (several thousand kilometers in diameter!) And differ in color from the rest of the atmosphere.

In the Saturn atmosphere - just like in Jupiter - different colored stripes are formed. They are colored by different gases such as methane and ammonia. The strips swirl with each other at the edges. sometimes dissolve and form anew.

The moons of Saturn

Saturn gathers many moons around it. There are currently 62 known moons. The most famous moon of Saturn is Titan, the only moon in the solar system with a thick layer of air.

Titan is so far the only moon (apart from our own moon) on which a man-made device has landed and explored the area. You can find out more about this on the 'Saturn Missions' page.

Saturn's moons are ice worlds, their surfaces frozen so far from the sun. Nevertheless, they are very different and each is a fascinating world.

The moons of Saturn include both the whitest and blackest moon in the solar system. More amazing details can be found on the 'Moons of Saturn' page.

Galileo's telescope was too weak to show the rings of Saturn clearly. Instead, the gas planet presented itself with two handles on the left and right. Galileo couldn't figure it out and assumed that Saturn might be accompanied by two large moons.

The exploration of Saturn 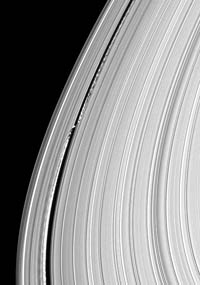 The ring system of Saturn is enormous about 250,000 km in diameter. In relation to this, it is very thin, the width is about one kilometer. There are also gaps within the ring material. The largest gap is named after its discoverer, the Cassinian division.

The stones of the rings probably come from the moons of Saturn. When these are hit by meteorites, the ejected material is thrown into space and spread around the planet.

The rings won't be around forever. They are attracted to Saturn's gravity and spiral towards it. This is how they will dissolve over the next millennia. Because if they come too close to the atmosphere of Saturn, they burn up in it. 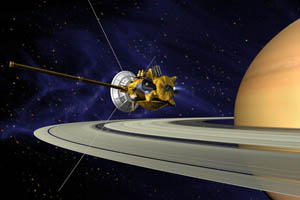 Our knowledge of the nature of Saturn and its rings has been greatly expanded through space missions. In 1979 the second largest planet in the solar system received a visit from Earth for the first time.

The Pioneer 11 spacecraft flew past him and sent several close-ups of the earth. Later followed Voyager 1 and 2 and in 2004 the Cassini spacecraft.

A sensational success story is from the Cassini spacecraft to report, which swiveled into orbit around Saturn in 2004 and since then has been busy observing the gas planet and its ice moons. 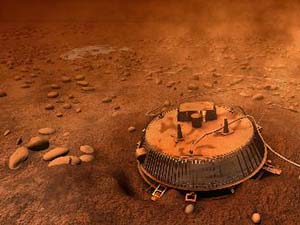 The probe explored the entire Saturn system, i.e. the planet, its rings and many of its moons. With the Huygens lander, it was even possible to land on the moon Titan.

Thus, for the first time, a view of its surface was possible, which until then had remained hidden from our view due to the thick layer of cloud.

More about this and some other Saturn missions can be found on the 'Saturn Missions' page.

Saturn in the starry sky

Saturn moves slowly between the stars on the 'planetary road', the ecliptic. People have known this for thousands of years. Already the ancient Greeks gave it the name Chronos (time), for the Romans Saturn was the god of agriculture.

Saturn is very easy to observe. If you have binoculars or a telescope available, you can even see its largest moon, Titan, and perhaps a few more of its numerous moons. You can find out when Saturn can be found in the sky and what its moons are all about on the page: 'Observe Saturn'.

The images on this page are from NASA (Courtesy NASA / JPL-Caltech).