What is the formula of cos 2x

This collection of formulas gives an overview of the most important trigonometric terms, relationships and identities.

In this article, the Greek letters alpha (α), beta (β), gamma (γ), and theta (θ) are used to represent angles. Different units of measurement for angles are used, the most well known being Degree (°), Radians (rad), and Gon (gon).

The following table shows the conversion of the most important angles between the various units of measurement:

Unless otherwise stated in the article, radians are used. If degrees are used, this is indicated by the degree symbol (°).

Sine and Cosine are the two most important trigonometric functions. They are usually written as sin (θ) and cos (θ), with the brackets around the angle θ often omitted: sin θ and cos θ. The sine and cosine are closely related. The cosine can be used as an order

sine shifted to the right can be understood:

The tangent is the third important trigonometric function. It can be written as a function of the sine and cosine:

The secans (sec), cosekans (csc) and cotangens (cot) functions are the reciprocal values ​​of the sine, cosine and tangent functions. They are defined as follows:

The basic relationship between sine and cosine is called trigonometric Pythagoras designated. It is one of the most important trigonometric identities:

. The trigonometric Pythagoras is derived from Pythagorean theorem from, which reads:

Where c is the length of the side opposite the right angle in a right triangle. In the unit circle it follows from the Pythagorean theorem that x² + y² = 1. The equation can be solved for the sine and cosine. It follows:

If you divide the identities of Pythagoras by cos²θ and sin²θ, you get two new ones Identities:

Trigonometric functions are periodic, so their function values ​​are repeated after certain intervals. Mathematically, periodicity is written as follows:

p is the Period. This property can also be illustrated well with the graph of a trigonometric function. With the sine (see graph on the right), for example, you can see that a period consists of a complete hill above and one below the x-axis. Then this pattern repeats itself. In the case of a sine, the period is based on the angles that it must represent - in this case a full circle with 360 ° or 2π. That is why one also says that the sine is 2π periodic. Other trigonometric functions have different periodicities depending on how they were defined:

Sine and cosine can be shifted to the left or right so that both functions are congruent. This also applies to other trigonometric functions: 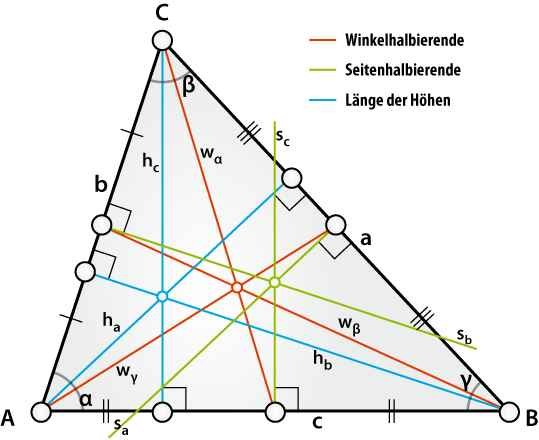 There are many formulas for calculating the area of ​​a triangle, some of which are hundreds of years old.

The symbols in the formulas correspond to the lengths as shown in the triangle on the right.

The function A calculates the area (from the English word Area = Area). Some books will put a small triangle in the index of the area function (

) when multiple area functions are listed, all of which are called A (x). Since we are only calculating the area of ​​triangles in this article, this is not necessary

This can be expanded with the heights:

The calculation of the area depends on which values ​​are known.

Two angles, one side

If only the lengths of the triangle are known, the area with the Heron's theorem be calculated:

Where s is half the circumference of the triangle:

In the coordinate system

Some tasks require that the area of ​​a triangle should be calculated from three points in the coordinate system.

Another, much simpler method is to set up a matrix in which the first row represents the x-coordinates and the second row the y-coordinates of the triangle. The third line consists of ones. Half of the amount of the determinant of the matrix corresponds to the area of ​​the corresponding triangle.

Since a triangle has three corners, there are three in total Heights. If the perpendicular falls from one corner to the opposite side of the triangle, this perpendicular cuts the side. This distance is called the height. The heights are abbreviated with a lower case h, with the letter on the opposite side of the triangle written in the index of the h (see diagram above).

In the triangle, the length of the three heights is calculated using the following formulas:

The bisectors can be calculated using the lengths of the sides a, b and c:

The lengths of the sides a, b and c relate to the bisectors as follows:

A bisector divides an angle into two angles of equal size. Each angle has only one bisector, so the triangle has three bisectors. The distance of each point on the bisector from either side of the angle is the same.

The bisector can be calculated as follows (A is the area of ​​the triangle and s is half the circumference):

These addition theorems were set up in the 10th century by the Persian mathematician Abū al-Wafā 'Būzjānī. One way to prove it is by applying Euler's formula:

The plus-minus sign (±) and the minus-plus sign (∓) mean that if a plus is used on one side of the equal sign, then a minus is used on the other side:

Relationships between trigonometric and complex functions

Each of the three trigonometric functions can be represented as an exponential function with the imaginary number i:

A special connection between the exponential function and the trigonometric functions is that Euler's formula:

This relationship between e, π, and i is known as the Eulerian identity. The formula contains the three most important constants of mathematics and is therefore regarded by many mathematicians as the most beautiful formula in all of mathematics.

In infinitesimal calculus (derive and integrate) the angles are always measured in radians, since other dimensions would only complicate the calculations unnecessarily. When trigonometric functions are defined geometrically, their derivatives can be found by checking two boundaries. The first important limit is:

This limit value can be proven by the unit circle and the constriction theorem. The second important limit is:

and can through identity

be proven. Based on these two limit values ​​and only with the differential quotient and the addition theorems, the derivation of sine and cosine can be proven. If sine or cosine is defined as a Taylor series, the individual derivatives can be found by differentiating all terms (term by term) of the Taylor series:

The remaining derivatives can be found by applying the trigonometric identities and derivation rules: