What is a servo motor machine function

Resolver
The resolver is similar in structure to a small electric motor with precision winding. The stator carries two winding groups, the winding planes of which are perpendicular to one another. The rotor has a winding on which an induced voltage can be measured.

From the phase shift between uR.(t) and uS1(t) the angle of rotation Phi of the rotor winding with respect to the stator winding can be determined. 2)

Incremental encoder
The digital encoders on an optoelectronic basis usually work according to the transmitted light method, but sometimes also according to the reflection method.
The incremental measuring method uses a support body made of glass as the measuring standard, on which a grid division of impermeable lines and translucent gaps is applied. Incremental encoders with 512 to 16384 lines per revolution are used (more rarely also 500 and 1000 lines). The lines (windows) offset by delta alpha are scanned by two optoelectronic sensors offset by delta alpha / 4.2)

Sine-cosine encoder
The Sin-Cos encoder system is a mixture of an incremental encoder and an absolute encoder. The absolute value is initially only formed when the device is switched on and communicated to an external counter via an RS-485 interface, which then continues to count incrementally from this absolute value with the analog sine / cosine interface. So that a high resolution is possible even at high speeds, the incremental encoder signal is not transmitted as usual in digital values, but as an analog sine / cosine voltage. Period numbers of 512 or 1024 per revolution are common. Sine-cosine encoders are available as singleturn as well as multiturn encoders with an additional acquisition of 4096 revolutions. 2)

Figure 4: How a resolver works / phase evaluation when the stator winding is fed (G. Schenke, Mechatronics) 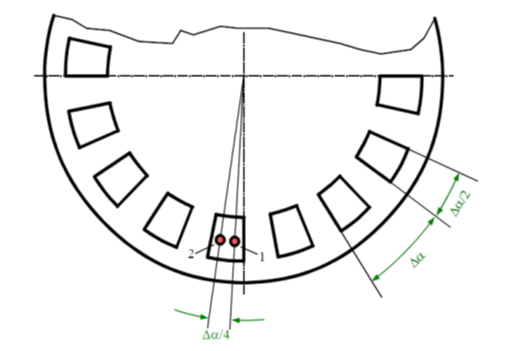 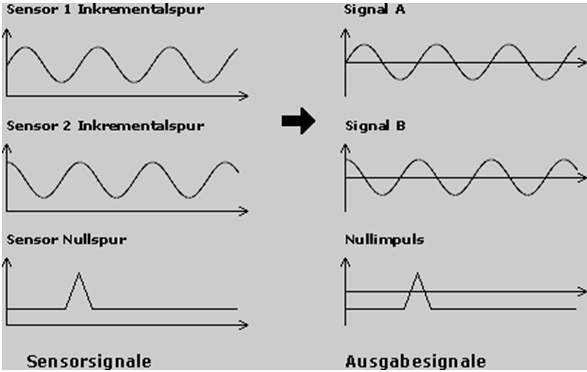